A Celebration of Two Past CAS Presidents 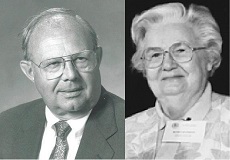 As the CAS approaches its centennial anniversary, the organization has been thinking a great deal about its history and celebrating the individuals who have played instrumental roles in the organization’s growth. Regretfully, the CAS recently lost two past presidents, Ruth Salzmann (1978 – 1979) and Jerry Scheibl (1980 – 1981). In celebration of their achievements, other past presidents Jim MacGinnitie (1979 – 1980) and Dave Hartman (1987 – 1988) share their memories and perspectives on the important contributions that Ms. Salzmann and Mr. Scheibl made to the CAS and the actuarial profession.

“Ms. Salzmann and Mr. Scheibl were both instrumental in moving the CAS and the actuarial profession forward thru turbulent times,” says Mr. MacGinnitie. During the time that they held office, “there was a threat that casualty loss reserves would be certified by CPA’s.” Ms. Salzmann and Mr. Scheibl were both heavily involved in discussions about which professions were qualified to issue opinions about casualty loss reserves. Mr. Hartman explained that, “Ms. Salzmann’s view that casualty actuaries are the most qualified professionals to opine on the reasonableness of casualty loss reserves, based on their knowledge and a willingness to be held accountable for their opinions, was particularly influential over the National Association of Insurance Commissioner’s decision to require statements of actuarial opinion. Mr. Scheibl was President of the CAS at the time of the first Casualty Loss Reserve Seminar which was held to train actuaries as qualified loss reserve specialists.”

Ms. Salzmann was a true pioneer for women in the actuarial profession and in the insurance industry. As the first female president of any major actuarial association, the first female officer at the Insurance Company of North America (INA), and the first woman to earn her FCAS designation by examination, she remains a true inspiration for many in the field. Ms. Salzmann may be best known to the public for the Salzmann curves – mathematical tables which served as the basis for property insurance pricing for more than 40 years. She was also respected for her vast knowledge of Schedule P in the statutory annual statement for P&C insurance companies, as well as her published works: Rating by Layer of Insurance (1963) and Estimated Liabilities for Loss and Loss Adjustment Expense (1984).

Mr. Scheibl was great advocate of volunteerism and service to the profession. “He frequently quoted Francis Bacon saying ‘I hold every man a debtor to his profession’ urging CAS members to volunteer for committees, write papers and appear on panels,” remembers Mr. Hartman. “He practiced what he preached by rising to President of the CAS in 1981 and earning the Jarvis Farley Award for Outstanding Volunteer Service to the Actuarial Profession from the American Academy of Actuaries in 1992. Many recall Mr. Scheibl describing the learned actuarial societies in the U. S. as the ‘brains’ and the American Academy of Actuaries as the ‘mouth’ of the U. S. actuarial profession. He had a great sense of humor, often delivering puns to his audience.”

“In each of their presidential addresses, Ms. Salzmann and Mr. Scheibl spoke about accountability, and of the debt we owe to those who have gone before us,” states Mr. MacGinnitie. “We owe them both a debt of gratitude for their service to the profession.”

We invite you to join Mr. Hartman and Mr. MacGinnitie in celebrating the lives of and accomplishments of Ms. Salzmann and Mr. Scheibl. Please share your own memories and perspectives of their contributions to the CAS and the actuarial profession in the comments section below.