In the category of U.S. Cities, the answers are:

For all of these, the appropriate game-show response would be:  “What is Minneapolis-St. Paul, Alex.” 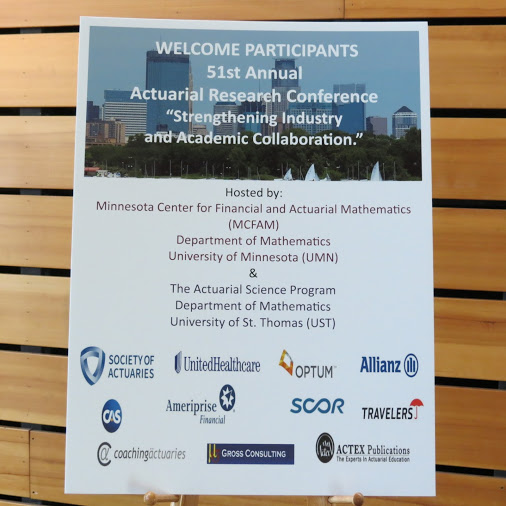 This year’s three-day Actuarial Research Conference (ARC) took place during the last week of July, and was co-hosted by the University of Minnesota and the University of St. Thomas.  This was, I believe, the first time in the half-century history of the ARC that two universities had cooperated in planning and hosting the event, and based on the result, it’s an idea that future hosts might want to consider.

The theme underlying this year’s conference was “Strengthening Industry and Academic Collaboration.”  Consequently, compared with many past ARC events, the amount of industry involvement was higher, in terms of both conference sponsorships and participant presentations.  If this continues into future ARCs – and my impression is that the mixture of theoretical and practical was rather well-received by this year’s attendees – it should make the event even more attractive to CAS members.

As has been the case for several years now, the CAS was a sponsor and had a display table, (wo)manned by the chair of the University Engagement Committee, Melissa Tomita, FCAS, and CAS University Engagement Manager, Tamar Gertner.  The table was a popular destination for information-seekers and other curious registrants, including academics, graduate students, and industry people.  In addition, there were a number of CAS members who actively participated in the program (apologies to anyone I’ve inadvertently forgotten):

…  So, I’ve been attending ARCs for something like twenty years, and when I arrived at the reception the evening before the ARC formally began, a number of friends and colleagues asked me what I was going to present at this year’s conference.  “Joie de vivre!” I exulted.  “For once, I am not presenting!  Let others do the heavy lifting, while I lean back, and watch, and learn…”  Or, at least, that was the plan…

Alas, and regrettably (for both him and the audience), Jonathan was unavoidably unable to attend the conference at the last minute, and someone apparently suggested that I could replace him, as they had heard that I “wasn’t doing anything this year…”  So I winged it with Jonathan’s slides, and provided a surrogate presentation no doubt many orders of magnitude worse than Jonathan would have produced.  (At least the interesting subject matter kept the audience from walking out on me!)

Other aspects of the conference worth noting:  a number of interesting property-casualty-related presentations, excellent meeting facilities, unique and fun entertainment, and beautiful weather.  And the cookies at lunch were quite yummy.  Trust me…

Rick Gorvett, FCAS, ASA, MAAA, CERA, ARM, FRM, Ph.D., recently completed a term on the CAS Board of Directors and chairs the Academic Working Group of the University Engagement Committee. He is the staff actuary at the CAS.
Posted in Research and tagged Actuarial Research Conference, Actuary Research, ARC.
Blog design by Matrix Group International, Inc. ®