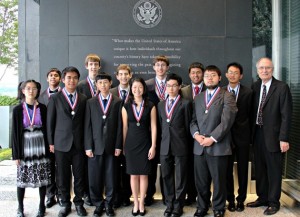 For the first time in 21 years, the United States won one of the most intensive math competitions in the world, the International Mathematical Olympiad (IMO). Teams of high school students from over 100 countries and seven continents participated in the 56th annual competition, held in Chiang Mai, Thailand. Over two days in July, a team of up to six students from each participating nation worked to solve just six math problems. The U.S. team defeated their competition and achieved a total score of 185. They were followed closely by China (score of 181) and South Korea (score of 161).

The U.S. team members were selected through a series of contests hosted by the Mathematical Association of America’s American Mathematics Competitions (AMC), including the USA Mathematical Olympiad. Each year, approximately 350,000 students strengthen their mathematical skills while participating in the competitions. The Casualty Actuarial Society is proud to be one of the longest-standing donors of the AMC and is committed to supporting mathematical education.

As an AMC donor, the CAS is invited to honor the most outstanding student participants at an annual event in Washington, D.C. (including the six students who advance to the U.S. team at the IMO).  During the morning session at the event, the CAS is given an opportunity to address the honorees during the program as a group and individually after the session has ended. Each year, Clifford Pence, FCAS and CAS Representative to the Mathematical Association of America, gives remarks on behalf of the CAS. During his annual address to the honorees, Mr. Pence provides information about the property and casualty actuarial profession, differentiates between the various field actuaries may enter, and also encourages the honorees to pursue an actuarial career.

“The CAS is very proud to be a long-standing supporter of the American Mathematics Competitions,” says Mr. Pence. “We believe that the continued support for the development of mathematical talent is not only important for the advancement of the actuarial profession, but for the benefit of the U.S. population as a whole.”