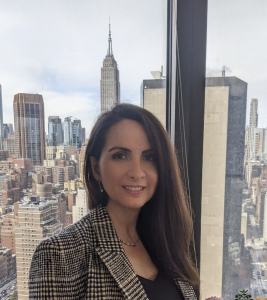 Marcela Granados, FCAS, CSPA, has been a long-time supporter of the actuarial profession. She started her actuarial career within the insurance industry, then moved to consulting before finally joining Databricks, a data and AI company, as their global head of insurance.

Marcela was raised in Mexico City, but she was born in the United States while her father was working on his doctorate degree in Boston. She earned her actuarial degree in Mexico, but quickly realized the limited access to educational resources. As she explains, “I realized that being a woman that studied in a public university without a powerful family last name was hindering my future as an actuary in my own country. The actuarial job descriptions in Mexico asked for male, married 25- to 35-year-olds that attended a private university. As a 22-year-old single female that attended a public university, I wasn’t even given the chance to interview for actuarial jobs in Mexico. I knew I needed to go somewhere else where I could be given opportunities based on merit.” Upon moving to the U.S., Marcela was admitted to Harvard University.

Marcela credits a lot of her success to mentorship and coaching. “I’ve been incredibly lucky to have strong support from female leaders, within and outside the actuarial profession. I remember being nervous about becoming a mom while juggling all the travelling I was doing as a consultant. One of the female actuarial partners at EY coached me through balancing motherhood and work. I was so inspired by the support I received, that I decided to give back by mentoring young promising female consultants.” Marcela believes in diversity, which was her main impetus to co-found the Organization of Latino Actuaries (OLA). “I believe the CAS does a great job at promoting diversity. I saw all the momentum from IABA and how the CAS was a platform to market their diversity efforts. I co-founded OLA because I remember my own difficulty around the exam process and access to funding for exam prep and materials”. Since 2017, OLA has raised $175,000 in funds and helped more than 200 students find actuarial jobs.

“I love seeing women in STEM because it shows that we can all break biases and stigmas. As one of my favorite quotes states, ‘Dream with ambition, lead with conviction, and see yourself in a way that others might not see you, simply because they’ve never seen it before.’” To keep up with Marcela and other initiatives she is working on within the industry, check out the OLA: Organization of Latino Actuaries website.