We write this blog post to celebrate Lesbian, Gay, Bisexual, Transgender, and Queer (LGBTQ+) Pride Month, share ways that you can help advance the LGBTQ+ community at your organization, and announce exciting news for the actuarial profession’s LGBTQ+ community.

Pride Month takes place in June each year to commemorate the 1969 Stonewall Riots.  The rioting was in response to a police raid of the Stonewall Inn, a bar in the Greenwich Village neighborhood in New York City.  This movement, led by black trans* folks and drag queens (including Marsha P. Johnson), marked the beginning of movements that have led us as LGBTQ+ people to gain rights including the right to have sex without the risk of being arrested (2003), visit a same-sex partner in the hospital (2011), serve openly in the military (2011 – trans* folks were banned again in 2019), be married (2015), identify as transgender without being classified as having a “mental disorder” (2019) in the United States, and be “out” in terms of gender identity and sexual orientation at work without risk of being fired (2020).  There have been victories; however, progress towards social equity is still needed.  This month is a celebration of achievements we’ve had as a community, but there is much, much more work to be done for members of the LGBTQ+ community to be seen as equals. 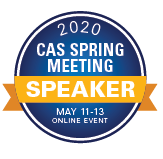 We had the pleasure of facilitating “Lesbian, Gay, Bisexual, Transgender, and Queer Identities & Allyship in Actuarial Workplaces” at the CAS Virtual Spring Meeting in May 2020.  Missed it, but still want to learn more?  We are hosting a free webinar version on August 11, 2020.  Register today!

Before we dive deeper into some facts, statistics, and ways that you can help advance the LGBTQ+ community at your organization, we need to break down the acronym LGBTQ. These different labels are defined below.

Lesbian: A sexual orientation that describes a woman who is emotionally and sexually attracted to other women.

Gay: A sexual orientation that describes a person who is emotionally and sexually attracted to people of their own gender. It can be used regardless of gender identity, but is more commonly used to describe men.

Bisexual: A sexual orientation that describes a person who is emotionally and sexually attracted to people of their own gender and people of other genders.

Transgender: Describes a person whose gender identity and gender assigned at birth do not correspond. Also used as an umbrella term to include gender identities outside of male and female. Sometimes abbreviated as trans*.

Queer: An umbrella term used by some to describe people who think of their sexual orientation or gender identity as outside of societal norms. Some people view the term queer as more fluid and inclusive than traditional categories for sexual orientation and gender identity. Due to its history as a derogatory term, the term queer is not embraced or used by all members of the LGBT community.

You might be thinking – why does this matter to us as actuaries?  LGBTQ+ people include your coworkers, business partners, clients, insureds, friends, and family.  It is widely estimated that ~5% of American adults identify within the community, and this number is growing by generation.  In a Gallup poll, it was estimated that 8.2% of millennials identify as LGBTQ+, and this number is estimated to be even higher for those born in the 2000s (Gallup).  It is a problem that these identities are not measured or captured, but the unfortunate reality is that in many places it is not safe to openly identify as LGBTQ+.  Making us feel included in the workforce is not only the ‘right thing to do’; it also yields a return on investment.  Like race, gender, religion, and other identities, LGBTQ+ folks are needed in the workforce – and in leadership positions – to bring a unique perspective and drive business results (McKinsey, Bank of America, Cisco).  When companies include more diverse perspectives in the room, they achieve better business results and financial returns (Harvard Business Review, IMD, Deloitte).

The workplace can be a tricky area of life to navigate for the LGBTQ+ community. Each year, the Human Rights Campaign produces a profile of different organizations with their Corporate Equality Index. Companies can earn a score ranging from 0 to 100 based on their inclusion policies for members of the LGBTQ+ community. The organization also provides facts and statistics about policies in every state that discriminate against LGBTQ+ individuals.

Members of the LGBTQ+ community are faced with challenges in the actuarial workplace that might not always be visible to others. Upon starting new jobs, we often have to make the decision of whether or not we feel comfortable being our authentic selves in the office. In certain parts of the country it can be a safety concern for individuals to be “out” at work. Out & Equal, LGBTQ+ workplace advocates, reports that 46% of LGBTQ workers are closeted at work. And there is often good reason for this number. 25% of LGBTQ employees say they have faced discrimination in the workplace. That number rises to 75% when solely looking at transgender employees. It is important for LGBTQ+ individuals to feel comfortable in the workplace in order for them to succeed. Statistics show that LGBTQ+ individuals are more likely to make it into leadership positions if they are “out” vs. if they are closeted at work. At times, hiding your identity at work can feel like a job in and of itself!

You may look at all of this information and wonder “how can I help?” There are a lot of ways that one can act as an ally to the LGBTQ+ actuarial community. We truly believe that the four bullets listed below are a solid starting point to help ensure equality. 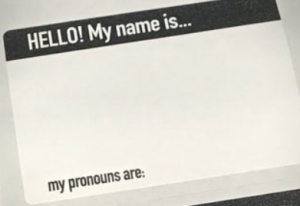 At conferences and events where lots of new people are meeting and wearing nametags, an easy inclusive step is to include a section for folks to self-identify their pronouns.  Allowing someone to write “he/him/his”, “she/her/hers”, “they/them/theirs”, another set of pronouns, or “ask me” prevents misgendering and also opens up initial conversations about what pronouns are and why they are important!

As the community itself continues to change, the language that is used develops as well. In more recent years, there has been a focus on pronouns – something that we can and should normalize using in the workplace. We all use pronouns every day and often don’t think twice about them. However, these words that are used to replace a name can be crucial to members of the LGBTQ+ community. Transgender and non-binary individuals are often faced with the challenging responsibility of correcting others that use the wrong pronouns and there are ways that we can alleviate this problem.

All of this might feel a little funny at first. But, we promise it will eventually feel like a natural way of getting to know someone.

Pride Month this year feels extra special, as we are beginning a new journey in the actuarial profession.  This has been a long time in the making – we are proud to finally announce the creation of SAGAA – Sexuality and Gender Alliance of Actuaries, a professional networking community on LinkedIn for LGBTQ+ actuaries and allies which aims to engage in community-wide dialogue about LGBTQ+ issues and aims to create a safe space for dialogue, community, and career encouragement – while also educating the broader actuarial profession.  Please follow our LinkedIn page to learn more and join our kickoff call on July 28, 2020!