Representing the CAS Globally: My Visits to Malaysia and Japan

It was my honor to represent the Casualty Actuarial Society (CAS) last week in Kuala Lumpur and Tokyo, in support of our commitment to contributing to the growth of the actuarial profession globally. In Kuala Lumpur, I presented at a conference on property insurance that CAS co-organized, visited with the regulator, and visited a number of universities. In Tokyo, I presented to the Institute of Actuaries of Japan (IAJ) on the CAS exams and the new designation offered through The CAS Institute, the Certified Specialist in Predictive Analytics (CSPA). I also visited with Masaaki Yoshimura, the soon-to-be President of the International Actuarial Association (IAA). It was a remarkable trip, and I’m excited to share the highlights in this blog post. 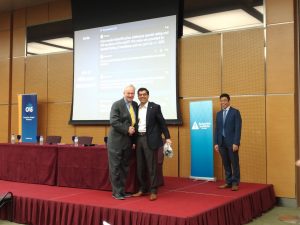 I would like to thank Mr. Gary Hoo, FCAS, President of the Actuarial Society of Malaysia, for inviting me to speak at the “Building Tomorrow by Adapting Today” Conference. Gary is a CAS Fellow and it speaks to the quality of our credentials when our members are presidents of actuarial organizations around the world. Gary led an informative session at the conference with executives from three local insurance organizations regarding the recent detariffication in Malaysia.

From all fronts, we heard a clear, loud and urgent message: the insurance companies in Malaysia want and need a dramatic increase in the number of property/casualty actuaries. The source of the need is marketplace changes, which were triggered by two regulatory changes:

1.) Detariffication and the future requirement that all companies have an internal pricing actuary; while this is a future role, companies are already making plans to staff up to meet the requirement.

2.) Implementation of an appointed actuary requirement for property/casualty insurers, requiring that the actuary opine on loss reserves and issue a broader Financial Condition Report on the company.

All of the sessions at the seminar were outstanding. In addition to Gary, we had three other CAS members speak the conference: 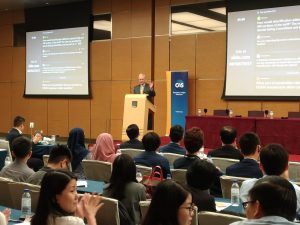 Following the conference, we met with the insurance regulator in Malaysia (Bank Negara Malaysia) and discussed what resources the CAS can provide. The regulator confirmed that the Malaysian demand for property/casualty actuaries should grow because of the new regulations.

I also visited and spoke at three prominent universities in Malaysia: University of Malaya, Sunway, and Heriot Watt. In addition, Jim Guszcza spoke at the Asia School of Business. Each of the schools has a very vibrant and energetic faculty that is excited about the job opportunities for their students. I was very impressed with the faculty members and the extensive actuarial curriculum. We gave a presentation to students at the University of Malaya and were impressed with the energy of the students.

I would like to thank several CAS members who helped me during my visit. We have been fortunate to have Shze Yeong Ong, FCAS as our CAS Ambassador in Malaysia the last several years, whose term recently ended. Yeong has enhanced the reputation of the CAS in Malaysia. He also helped plan the conference, joined us in our meeting with the regulator, and attended the Heriot Watt campus visit. He has done a wonderful job as Ambassador and we wish him the best with his future endeavors.

We are very fortunate to have the highly-qualified Kenny Tan taking over as Ambassador in Malaysia. He is an FCAS and Chief Actuary at AmGeneral Insurance.  Kenny moved back to Malaysia after studying and working for 14 years in the United States. Kenny joined us for visits at University of Malaya and Sunway and gave an excellent presentation at the University of Malaya on the future demand for actuaries. I look forward to Kenny’s work as our Ambassador.

The University of Malaya students were lucky to have Renuka Subramaniam, a recent graduate, present with us. Renuka graduated from University of Malaya a year ago and decided to pursue the CAS exams. She gave the students a perspective on why she chose the CAS exam path and described what type of work she has done in the last year. The students broke into applause when she shared that she found out that she had passed CAS Exam S the day before our visit. 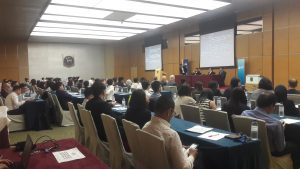 I would also like to thank Michael Chou. Michael is the CAS staff representative in Asia and arranged our meetings. He also organized a dinner for our CAS members in Malaysia and a reception for the students pursuing CAS exams in Malaysia. Both events welcomed high attendance and offered the pleasure of getting acquainted with our members and candidates in the region. I enjoyed discussing the changes that the Malaysian market will go through with detariffication.

The CAS has a number of very successful and energetic members in Malaysia. It is a great time to be a property/casualty actuary in Malaysia!

In Tokyo, Bob Conger, FCAS and I met with Masaaki Yoshimura, the soon-to-be President of the IAA, about how the CAS can assist the IAA advance the actuarial profession around the world. Yoshimura-san was also very interested in the CAS predictive analytics education.

We also met with Ikuo Kudoh, the General Secretary of IAJ, and several members of the IAJ to discuss predictive analytics. I gave a presentation on our exam material and on establishing The CAS Institute and the CSPA credential in Japan. The demand for people with skills in predictive analytics is increasing in Japan. The IAJ in interested in further discussions with us after they have had time to study our syllabus in more detail. The CAS looks forward to enhancing our relationship with the IAJ. It is clear that the demand for education on predictive analytics is increasing globally and other actuarial organization are interested in the CAS’s leading position in this area.

In closing, I would especially like to thank Bob Conger. Bob is a CAS Past President and is currently the CAS International Ambassador. Bob’s service to the CAS is invaluable. He has established strong relationships with many global organizations and individual leaders. He provided significant value at all the meetings attended and impressed me with the shared respect Bob displays and elicits.