What are Your Highlights from the CAS Centennial Celebration and Annual Meeting? 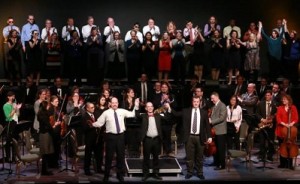 As the CAS moves forward in its Centennial year to address the many challenges that lie ahead, I want to take a moment to reflect on the kick-off to the year – the Centennial Celebration and Annual Meeting held last month in New York City.

The Centennial Committees who put together the event did a fantastic job and I greatly appreciated all of their hard work. And the attendees did too – I have heard from many members, both on-site and after the meeting, that it was the best meeting they have ever attended, from the quality of the continuing education sessions to the ample networking opportunities that allowed us to reconnect with colleagues. And the Gala Dinner was off the charts!

The CAS Centennial website is being populated with photos and videos that will bring back memories of an amazing four days. Two of my personal highlights were

For those who attended the Centennial Celebration, what were your personal highlights? I invite you to share one or two by leaving a comment on this blog post. I hope you’ll take a moment to reflect and reply, so we can capture your memories for posterity.