Posted on September 13, 2012 by Melissa Casemier

The Continuing Education Compliance Committee (CECC), a small group of volunteers, was charged with auditing the 2011 Continuing Education (CE) logs for a sample of members as well as the CAS Executive Council and elected Board members.  Through the process the CECC learned a lot and will share results and observations both through a series of blog posts as well as an upcoming article in the Actuarial Review.

We are pleased to report that all audited members passed.  The CECC concluded, and the CAS Executive Council agreed, that each audited member met the requirements and documented his/her CE.

The audit was conducted anonymously – only the CAS staff knew the names of the randomly selected members, with the CECC using only ID numbers. All communications with members were done by CAS staff. While all passed, some members did not receive as much credit as their original documentation indicated. We provided guidance to many of the audited members, based on the CECC review of their documentation.

What constitutes CE is largely in the judgment of each CAS member.

Activities that would be CE for one member may not be for another, depending on their prior education, background and area of practice. As auditors, the CECC sometimes needed additional information to satisfy that the standards were met, but what constituted CE was largely left to the judgment of the member. The third in our series of blog posts will discuss relevant CE in more detail.

The CAS staff selected a random sample of 1% of the membership reporting CE compliance, who were audited along with all of the members of the CAS Executive Council and elected Board members.

Members are subject to various national CE requirements and reported compliance as shown below:

We note there appears to be confusion as to whether or when a member would report compliance under CAS Alternative Compliance Provisions vs. a national standard. The CAS Code of Professional Conduct requires members to meet national qualification standards, if they practice where national standards exist. Most CAS members reported compliance under the US Qualification Standards or the CAS Alternative Compliance Provisions (non-US, Canada, UK or Australia). While these two standards are similar, there are some distinct differences in meeting the requirements.

This blog compares these two standards. Each member was audited according to the standards they reported under.

In CECC discussions, there was some confusion around the terms “job relevant” or “relevant,” which have slightly different meanings under the two standards. In addition, the definition of “structured” and “organized” activity differs. The meanings and some examples are highlighted below.

Another area of confusion related to the definition of “business skills” will be addressed in a later blog.

A number of other items also differ under these standards. The table below compares key points. 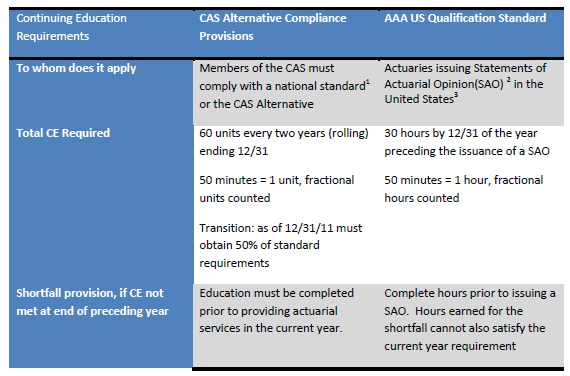 1 The CAS Code of Professional Conduct requires members to meet national qualification standards, if they practice where national standards exist.

3 There are additional specific CE standards which apply to AAA members providing Prescribed Statements of Actuarial Opinion or Enrolled Actuaries. Also, CE requirements are only part of the overall Qualification Standard. 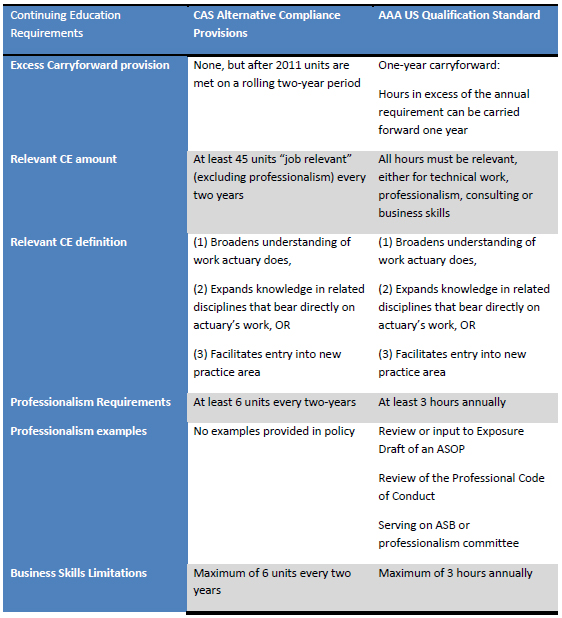 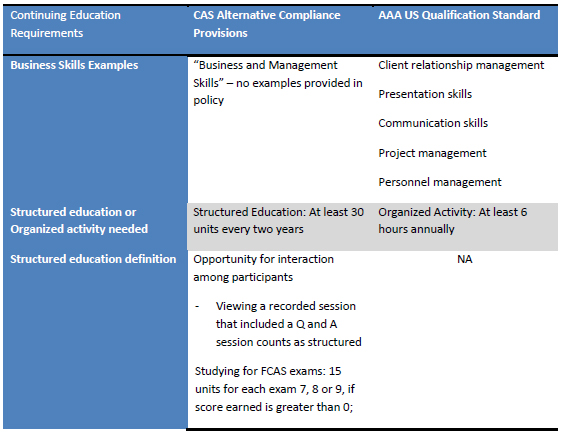 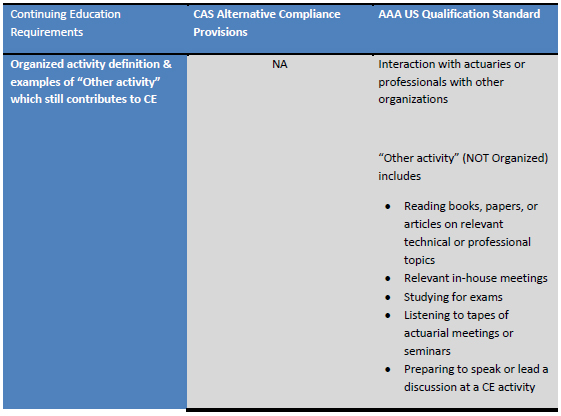 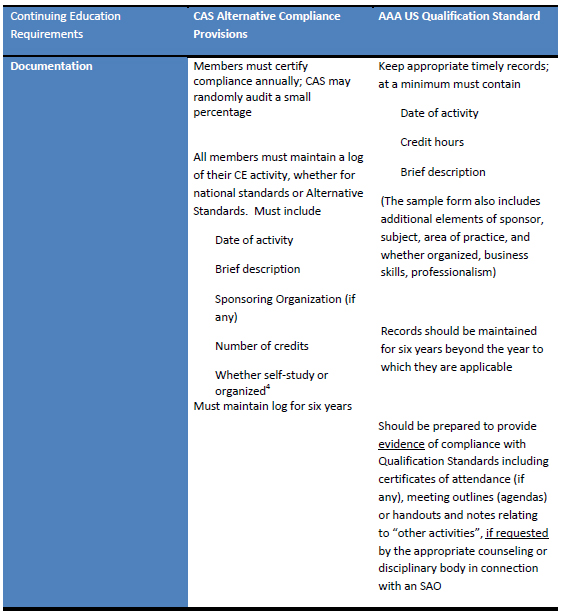 4 CAS may mean “structured” vs. “unstructured” if member falls under the Alternative Compliance Provision

The CECC welcomes your feedback and comments. Please leave a reply below, or contact the Committee through its Staff Liaison, Melissa Casemier.

Next up in our CE Policy blog post series: CE Documentation – The Good, The Bad, and The Ugly.