An Actuary and an Epidemiologist Walk into a Bar

Posted on December 9, 2021 by Multiple Authors 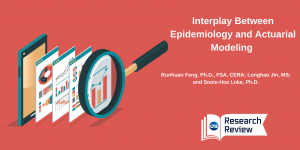 Actuaries and epidemiologists share a lot in common. Both use advanced mathematical tools to study human behavior, investigate patterns, and manage risks. The medical profession has long utilized epidemiological models to understand the dynamics of epidemics and to project the trends, preparing for the allocation of medical resources and developing public health policies. Similar goals are shared by the insurance industry, such as projecting the unpaid insurance liabilities for medical expenses and setting aside the reserves for healthcare claims from preventive measures such as vaccination and medical treatments pertaining to epidemics.

Despite the apparent analogies between the two fields, there has been relatively scarce research in the insurance literature on how epidemiological models can be used in insurance modeling. Our paper,  “Interplay between Epidemiology and Actuarial Modeling,” in the CAS E-Forum attempts to review some epidemiology modeling tools, discuss how they can be adapted for actuarial framework, and suggest some future research directions.

Broadly speaking, we can categorize epidemiology models into four different types: homogeneous mixing, heterogeneous mixing, network-based, and agent-based. The simplest level of modeling assumes homogeneous mixing, which is to say that everyone in the population is equally likely to be susceptible and infectious.  The widely-used compartmental models such as Susceptible-Infected-Removed (SIR) and Susceptible-Exposed-Infected-Removed (SEIR) are some prime examples. As a toy model, consider the case where susceptible policyholders pay premiums as long as they are healthy and receive benefits during the duration of their disease. The insurer’s reserve level can be studied analytically and it turns out that it is closely related to the general reproduction number, which is the number of people in the population who can be infected by a single individual at a given time. (For an in-depth overview of compartmental models and further actuarial applications, ranging from product design and reserving of epidemic insurance, to the projection of healthcare demand and the allocation of scarce resources, interested readers can consult another one of our parallel works here.)

The next type of model relaxes the homogeneity assumption, where social structures such as age, sex, and other demographics are introduced into the model. One interesting and important structure is known as the infection age, which measures the time an individual spends in the infected compartment. We are currently exploring the connection between this type of epidemic model with loss triangles commonly used in property and casualty insurance. This forthcoming paperiii (currently preprint) opens the door to alternative approaches for understanding the unusual dynamics of insurer’s net income and medical cost ratio during the COVID-19 pandemic period. As these metrics are highly driven by the number of confirmed COVID-19 cases, which results in subsequent hospitalization and continued care, actuaries can learn from other experts in an effort to better quantify pandemic risk.

The third one is known as contact network model, where the individuals are connected by links to describe interactions between them. Network models have been used to study cyber risk, for example, the propagation of malware through a network of interconnected computers. While network-based models have desirable and complex properties that cannot be replicated by equation-based models, network models are computationally expensive and often result in high-dimensional analysis.

In summary, our recent paper in the CAS E-Forum highlights the interplay between actuarial science and epidemiology and provides literature review of recent results. It is our sincere hope that this will point to new sources of inspiration for actuaries working in areas of risk modeling and assessment of dynamically evolving populations. Rather than creating new models, we believe that actuarial researchers and practitioners could take advantage of the endless array of epidemic tools developed in the medical literature to perform actuarial analysis during a pandemic.