The first High School Actuarial Day was held on April 18 at DePaul University in Chicago, led by the CAS. Our goal was to expose high school students of color to the actuarial profession. We partnered with DePaul and were joined by the SOA, The Actuarial 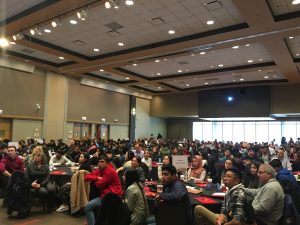 Foundation, the International Association of Black Actuaries, the Organization of Latino Actuaries, Gamma Iota Sigma, and CNA in supporting the event.

We had 300 students and teachers from 14 schools participate. We generally targeted schools with a high percentage of students of color, and within these schools, students in advanced math classes. The event was open to all but we believe we met our goal, as there was a significant number of students of color at the event.

Before I provide more details, I need to thank some people, because putting on an event like this requires a lot of work. 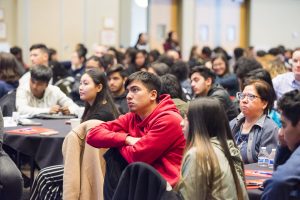 The goal of the program was to expose high school students to the actuarial profession as a career choice. Recent research on barriers to entry into the profession for under-represented demographic groups has shown that one of the main reasons that students of color do not enter the profession is their lack of knowledge of the profession until late in college. This puts them at an enormous disadvantage as many employers want students who have passed a couple of exams and have completed an internship before offering full time employment.

In making the students aware of the profession, there were some common themes we wanted to communicate about the appeal of being an actuary:

1.) Actuaries look forward to going to work – they enjoy their job because they know they are making a difference in people’s lives and society as a whole;

2.) Actuaries believe they are well compensated;

3.) Actuaries enjoy working with other actuaries and risk management professionals;

4.) Actuaries are generally nice and intelligent people; and

5.) Some actuarial jobs involve travel, which is exciting.

I kicked off the event by providing an overview of the agenda. Next Amanda welcomed the students to DePaul and Tom Edwalds, FSA, ACAS, a professor at DePaul, talked about the DePaul actuarial science program.

The next group of speakers were Sharon Robinson, FCAS and Alejandro Ortega, FCAS.

Challenging the Students with Interactive Problems 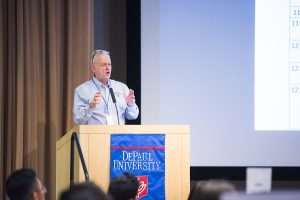 Next I went through a simple math estimation problem about how many points a professional basketball player would score. I drew on insurance analogies, like when to use a Loss Development Factor method versus a Bornheutter-Ferguson method. We then turned it over to the table leads. We had 40 tables of 10 students and at least one volunteer per table. There were fantastic discussions at the tables and it seemed like the students provided some good ideas.

Next I put up a picture of two cars and asked what factors will affect auto premium? The tables then discussed factors such as age of the driver, location, etc.

What Does an Actuary Do?

Next we had three speakers talk about different types of jobs that an actuary can have.

We then encouraged table discussions, with the leaders discussing different types of jobs with the students, who were very engaged.

How Do You Become an Actuary?

The next session discussed the process to becoming an actuary. Rohan Cotah and Michaela Fossberg, two students at DePaul in the actuarial program, spoke about the actuarial program at DePaul. Next Briana Botros, a relatively new FSA at Milliman, spoke about the exam process. We also highlighted that more than 70 companies employ actuaries in Chicago and provided the names of the companies to the students. We then broke into the table discussions where the table leaders elaborated on the process. 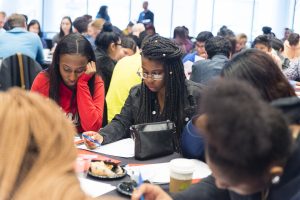 Next Joe Wurtzburger, FSA and Staff Fellow at the SOA went through a number of logic problems. Joe was a great choice for this section as early in his career he taught high school math. He introduced a number of problems and then asked the table leaders to have the students work on the problems as a group. We wanted to make the point that if the students enjoyed solving problems like these then they likely would enjoy being an actuary. As I walked through the room there was a lot of great thinking and discussion of the problems.

We then had a team competition by table to win raffle tickets. We gave each table 20 problems and the more problems they got correct the more raffle tickets they got. The intent was to have the students work as a team. We then drew the two winning tickets and each student at the winning tables got a $10 Amazon gift card. I found out later that one of the winning groups divided the students into 3 groups at his table and had one group do problems 1-7, a second group 8-14, and the third group 15-20. You can always count on actuaries to come up with creative approaches!

Wrapping Up the Day

We ended the event by describing some of the resources available to schools and students.

Not only was this event a benefit to the students who attended, but as we promoted the event with high schools visits, we educated a much larger population of students about the actuarial profession. In fact, some of the schools who could not attend have asked us to provide the materials that were presented at the event so they could share them with their students.

Several teachers thanked us for putting together the program. They thought it was very valuable for the students. We got especially high marks from Steve Appel at Curie. After being an actuary for 30 years, Steve decided to change careers and teach high school math. He teaches at Currie, which has one of the highest populations of students of color in Chicago. Leaders of Chicago Public Schools also attended and thanked us on the high quality of the event.

I plan to make this an annual event in Chicago, as we work towards building a diverse pipeline of future actuaries!

To view photos from the event, see the album on our facebook page.

Posted in Communications, Diversity, From the President, Future of the Profession.

3 Responses to High School Actuarial Day at DePaul University: Building a Diverse Pipeline for the Profession